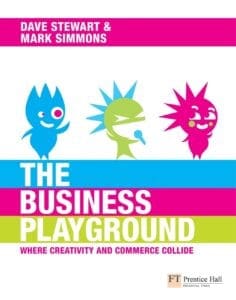 So Dave, nice to chat to you again in London.  The Business Playground has been getting some great coverage in the press and from the book retailers themselves.  It’s quite a departure from traditional business books, so how did you and Mark come together to write the book?

I’d known Mark for a while, and I particularly liked his book Punk Marketing.  We’d been talking about creativity and we floated the idea of writing a book together.  He was like O, and I said lets make it unusual and fun and I wanted to  make sure underneath there’s a lot of strong powerful messages underneath that readers could understand in small bitesize chunks. We had to make it so that businesses could identify  where they are going creatively too.  We needed to make it very visual too, with loads of bright colours.  Once we’d agreed what we were doing we just dug right in there

Was the concept easy to sell to the publishers?

We first went to Marks original agent but he was about to retire so we found a new one who took the rough manuscript to Financial Times. Pearsons who were engaged straight away and really supported the idea, and very quickly we set down some time lines for the book to be written.

So how long has the book taken for you to put together and get published?

Well in my mind I’ve been learning all about these things from being a kid, through The Tourists, Eurythmics and everything since then, but the physical process took four or five months, but that was scattered over about 18 months.

The world and mind of Dave Stewart is like a whirlwind, at least thats the impression most onlookers see, but going back to times at Anxious Records, do you think that the philosophies and ideas from the Business Playground were being applied to the company, it always seemed to be such a fun place to be.  Is there a huge difference between Anxious and Weapons of Mass Entertainment?

Well Annie’s life is quite a whirlwind too, but yeas I guess I have a lot more business acumen now, my understanding of what is and is not possible is much better.  I find it a lot easier to go from A to Z now without falling through the cracks on the way, but back then it was just a huge experiment list really, and a case of lets try this, lets try that.  I still have all of that experimental enthusiasm though, and we can obviously do things now thanks to technology in totally different ways, and I like to do things differently to the traditional laid out rules, thats what we do at Weapons.

On the Jonathan Ross Radio Show yesterday on Radio 2, you were talking to him about the process of connecting the dots and looking at a position where you are, where you want to go to, and what you need to do to get from one to the other, similar to the A-Z you’ve just spoken about.  In the business playground, Chapter 10 is called connected and seems to be quite instrumental in achieving success, do you think anyone, whatever stage they are in their career can make these changes?

Yes, I do, and its not just about adopting it for your career, people often forget some of the simple things that they used to love doingif you were  12, and used to really enjoy fishing, its quite simple to be able to get back into it, connect the dots of where you are now, and what you want to do, and these activities can easily be woven and moulded into your business or vocation, and that may be in your garage.  A lot of people start a hobby in their garage, which can become their passion, and in some cases a business is created.  The feelings they get from their hobby can begin to outweigh thos in you other job, and at some point you cannot ignore that any longer.  Its like the Anita Roddick story with the Body Shop, where she started making soaps and creams and lotions in her garage which turned into the global brand of The Body Shop.

The Anita Roddick story is an incredible one, but on a smaller scale there’s people like Mes Footwork who produce bespoke trainers based in the North East, who now are sold in some department stores.

Yes, and he was quite young, I was telling this story on Jonathan Ross about this older guy who was in the pissing rain, climbing up and down his ladder for the 10th day in a row taking bricks up in a hod, not getting paid for his overtime, and he has this moment of epiphany and says hold on a minute, and this guy used to love sailing when he was younger he was in the Sea Cadets, anyway, he put 2 and 2 together and decided to get himself a little boat. It was a cheap beaten up one, and spent time rebuilding it and fixing it up, which took him about a year, but I don’t think he ever thought he’d sail to the Caribbean in it, he probably just hoped he could sell it for more than he paid as he loved messing about with boats, but he did end up sailing to the Caribbean and that became his job.

Part 2 will be published on Friday where Dave talks about Nokia, Treasure Tag, and about other projects he’s working on.  In the mean time, don’t forget to enter the competition.