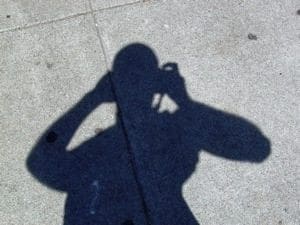 Late November, I made contact with Steve Rapport who was responsible for a number of early images that really gave Eurythmics their visual identity, and was the co-author of the Definitive Biography. Steve put down his camera many years ago, but has recently taken photography up again. I asked him about some of his memories of working with Dave and Annie.

As you are now aware, Eurythmics are almost 25 Years Old, and are about to be inducted in the Rock and Roll Hall of Fame here in the UK.? Going back across their history, you are probably responsible for capturing a lot of pictures that Eurythmics became famous for, how did you first meet Dave and Annie?

I think the first time I met them was when I was hired by RCA to take pictures on the set of the Love Is A Stranger video. Thus began a relationship that lasted many years.

What was the first photo shoot that you did with them?

Back when I used to freelance for Sounds in the early 80’s, an old journalist friend called Mick Sinclair took me with him to shoot photos for his review of a new band who were playing their first gig together, at a club in London called the Barracuda. The band was Eurythmics, featuring Dave Stewart on double-neck guitar and keyboards, and Annie Lennox in a black wig and black cat suit, looking a dead ringer for Emma Peel in The Avengers.? Dave also worked the light board from the stage, which was just a little unusual!

You worked a lot I believe capturing images while their Video Shoots were being filmed, which video did you enjoy being involved in the most?

That would have to be a tie between Sweet Dreams and Who’s That Girl. In fact, if you watch the Sweet Dreams video, there’s a scene where Dave is sitting at the board room table in the middle of a field, while fiddling with a piece of electronic gadgetry. That electronic gadget was my light meter. 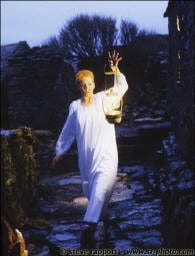 There are many stories of how cold some of these shoots have been, especially in the Orkneys do you have any memories of this?

Yes, well, Here Comes the Rain Again was a trial, in the Kafka sense of the word. It was shot ion a remote island off the coast of Scotland in the middle of December The hotel we were staying in was run by a Nazi, the weather was ass-freezing cold, and the bulk of the filming was in a little croft (a stone cottage) that was hundreds of years old and had no heating. The croft was primarily (or perhaps completely) lit by candles. I was standing with my back to a dressing table talking to Dave when he kindly pointed out that my jacket was on fire. And you know what? He was right.

As usual, Annie was a trouper. She had to wade in icy cold water dressed in a nightie (well, she was wearing thermals and wellies underneath, but still…) and she caught a cold, but she never complained and just a great job.

Eurythmics videos were the best, bar none. I worked with them on Love Is A Stranger, Who’s That Girl, Sweet Dreams, Here Comes the Rain Again, There Must Be An Angel, and 1984 (I think that’s it), and they were all so imaginative and film-like that they were a joy to work on. I always spent a lot of time with Dave, ‘cos Annie would be on the set all the time, and Dave would pose for me and goof around. Then I’d get the most amazing photos of Annie, thanks in no small part to the excellence of lighting cameraman (I think his name is) Chris Ashbrook.

Creatively, how involved were you with working with Laurence Stevens?

I worked pretty closely with Laurence on a number of projects, including of course the Definitive Biography book, which he designed. My recollection of Laurence is that he was an immensely stylish and highly talented young man, and a lovely bloke as well.

Your book, the Definitive Biography is now over 20 years old, you were given access to Dave and Annie to help produce the book, do you have any interesting memories of this time?

Bear in mind that when we started on the project, it was called The Official Biography.??

The book was a blessing and a curse. Allow me to explain. My friend Johnny Waller was an excellent writer and incidentally a great footballer (when he could control his temper). Johnny is sadly no longer with us, as he was killed in a bicycle accident around 10 years ago. When we started working on the book, Johnny had a young assistant editor working for him, called Rebecca. Rebecca and I met, fell in love, and got married in 1989. Although we separated at the exact time Johnny died, and later divorced, we are still best friends out here in San Francisco.

Back to the book. Johnny did the writing, and I did the picture research. We were given childhood photos by Dave and Annie’s parents, we spent time in Aberdeen interviewing Annie’s family and friends, and I travelled to Toronto, New York and Austin, Texas with Eurythmics.?

At one point, I had sent a few sheets of transparencies to Dave and Annie for their approval. I got a frantic phone call in the middle of the night from Dave Stewart, who said he was calling me from the Sunset Marquis, the famed rock and roll motel in L.A. He said that he was walking by the pool with my pictures in hand, when he slipped and fell into the swimming pool. The photos were of course soaked, and he thought that they were probably ruined. Now, I never did find out exactly how Dave happened to end up in the pool with my photos, but I was fortunately able to get them cleaned up, and they were luckily still usable.

Everything was going great… but then we had to send the manuscript to Dave and Annie in New York. We travelled to NYC, where we saw Eurythimcs play at Forest Hills in the pouring rain. Unfortunately, word came that Annie didn’t care for the manuscript, and as a result we were informed that the book would no longer be called The Official Biography. We were told that we could still call it The Definitive Biography, and still use all of the photos we’d been given. A seemingly minor detail, but as a result we lost our U.S. distribution deal, and Virgin Books lost interest in promoting the book when it was finally published. Although I always felt that it was a superior example of the genre of rock biographies (Laurence’s design obviously helped, as it looked like a genuine Eurythmics artefact), only 15,000 copies were printed, and it was never reprinted.

The strangest part, though, was that when the book was published, Dave and Annie really liked it, and were very complimentary about it in interviews. 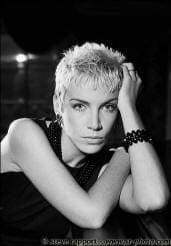 Which one photo of yours do you think captures either D, A or both as a perfect picture in your opinion and why?

I always thought that this picture was the one that really captured her essence. This is one of the two or three best photos that I’ve ever taken, and if there’s a better photo of Annie in existence, I’d like to see it! She looks so serene, so radiant, so beautiful.

Dave and Annie are on comeback now, and by the sounds of it, your interest in photography has been re-captured, would you work with D&A again given your experience and knowledge all these years later?

That would be a challenge as I haven’t taken any rock and roll photos for about ten years. But I’d LOVE to work with D’n’A again – or even to see them again. If they’re ever in San Francisco, I’d be delighted to hook up with them. And if they’re around in London over the Xmas holidays, I’ll be home for a few days and would welcome the chance to get together.

Finally, do you have any other stories or anecdotes that I could use?

I think that’s enough anecdotes for one evening. It’s midnight now and I need to take a bath and get to bed 🙂

Steve, Thankyou so much for your time and your interesting stories!