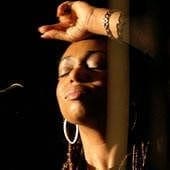 Beverley Skeete is instantly recognisable as one of Dave and Annie’s backing singers, with great exposure as part of Annie’s first ever Solo tour. Beverley has an astonishing list of credits to her name (have a look on her website!), but the list includes ABC, Boy George, Neneh Cherry, Jamiroquai, Tom Jones, M-People, Alex O Neal, Simply Red, Squeeze, Suede, Take That and Tina Turner amongst others.

It is with the Rhythm Kings, Bill Wyman’s band that she has had her biggest success. Since 1997 she has recorded more than 7 albums with them. Beverley has managed to maintain her position as one of the United Kingdom’s busiest and hardest working vocalists by combining a commitment to technical excellence with a genuine enthusiasm and passion for all that she undertakes. I managed to ask Beverley a few questions recently which she has kindly answered!

You obviously have an incredible discography of people and tracks that you have been credited on, are you one of the hardest working backing singers in the Industry? and do you like the anonymity that allows you to walk down the street without being noticed, or do you now feel its my moment, everyone, listen to my music now?

Having worked with so many artists over the years I have come to appreciate the anonymity that backing singing affords. However, I have been assuming centre stage with the ‘Rhythm Kings’ for many years now and find that equally as rewarding. I have no problem with being an artist in my own right and look forward to the challenges that this brings.

How did you first come to work with Dave and Annie?

I was first recommended to Dave and Annie by a friend within the business. I felt honoured to working with artists that I had appreciated for many years.

Working with Dave and Annie is similar to working with all the great artists that I have worked for…they all have tremendous skill and enthusiasm for the work that they undertake.

From a creative and artistic perspective, is your opinion and input expected into how songs are performed, or is it more of a case of this is how this song is going to be performed.

Dave and Annie always have a clear view of how they want their music to be performed. As an artist and writer myself…I respect this and treat the performance of their music as I would expect others to treat my music.

You were on both of Annie’s solo tours, both very different, one the smaller theatre type venues, the other with Sting in the big stadium’s. Can you recall some of your favourite moments from both tours?

Firstly, even though I was asked to work with Annie on the second tour, I unfortunately had a prior commitment to tour with the ‘Rhythm Kings’ and could not participate in the Sting American tour. The first tour was very exciting because believe it or not: it was the first time that Annie had embarked upon a solo tour. Because this was groundbreaking in it’s own way I was honoured to be a part of it and to witness her confidence grow on every performance.

Eurythmics are well known for being able to perform their songs in so many different ways, almost re-inventing songs to inject new life into them, and allowing them to keep them fresh. Is this a challenge for you as a backing singer?

Re-inventing songs helps to breathe new life into them and makes performing them much more interesting. As we all know ,audiences become accustomed to hearing their favourite songs in a certain way. For the artist (even though they love the songs )they have to find a way of performing them to maintain their own interest. This sometimes involves changing the arrangements and even the melodies a little, but it gives the audience something else to think about when they leave a performance.

My favourite track is “Why”. I love the emotion and the sentiment in the lyric, and her performances are astounding every single time I hear her sing it.

Annie is renowned for being a perfectionist, does this mean that you have to give 110% every time you perform with her?

Annie is a perfectionist, but so am I. I would expect nothing less of myself or she of me.

You’ve appeared at many of the high profile concerts over the last few years with Annie \ Dave. Buckingham Palace and Live 8, 19 Managements party spring to mind, do you see these as just another performance, or does the enormity of the event take over and make you want to give more?

Quite honestly, the one thing I have learned from working with great artists like Dave and Annie is to treat every performance with the same importance. I personally believe that whether I am performing to 2 or 2 million people I should give 110%.

Tell me a bit more about your work with The Rhythm Kings?

I joined the ‘Rhythm Kings’ in 1996 .I was again recommended by producer Stuart Epps with whom I had worked on an Elton John Album.Initially, I was hired to demo tracks for Chaka Khan, Tina Turner and Cleo laine who were to sing the finished product for Bill’s album. As usual I put my heart and soul into my work and found that I had the right sound for the this style of music.Having lived with the tracks for many months Bill decided he couldn’t hear them in any other way and so I was asked to join the ‘Rhythm Kings’… to my delight. I have since then recorded nine albums and performed worldwide with Bill ,having just completed a long European tour in 2005.This year there will be a new ‘Rhythm Kings’ album and a European tour in January and a UK tour in October/November. (for full details check my website.)

And your new album Hero Garden, what musical influences do you feel have become part of this album?

‘Hero Garden’ is a culmination of many musical influences throughout my career you will notice this album has a distinctly country tinge to it. This is because country music has long been a love of mine. However I am not a country singer and that is what creates the interesting balance of influences on the album.

Have Dave or Annie had a chance to hear it?

As yet I have not started my promo mail- out ,but they will be first on the list.

My plans for 2006 are to continue being the best that I can be, and to enjoy music as it was intended to be…and hopefully sell millions of copies of “hero garden”…..!

Thank you so much for your time Beverley

Thank you for being interested in me and I hope I have answered your questions fully enough for you.

Finally have a wonderful new year lots of love Beverley.xxxx