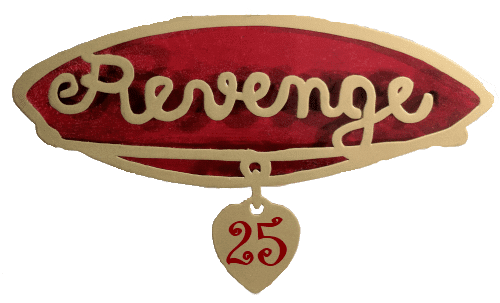 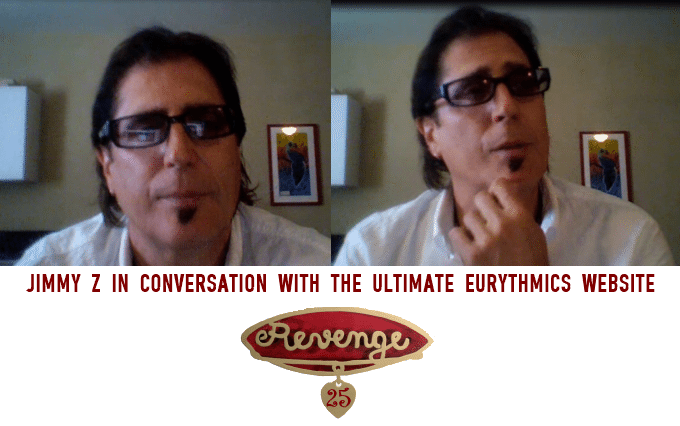 Jimmy Z Zavala sure made an impact on Eurythmics fans, firstly for his distinctive saxophone and harmonica playing on the Revenge album, but more so for his solo’s and on stage antics on The Revenge Tour.

Jimmy Z had known Dave Stewart for a number of years, as we will find out. Now living in LA where he is in demand for recording sessions and producing records and songs for other artists, he still plays with his own band, Jimmy Z and the ZTribe, mostly in Southern California.

Jimmy very kindly recorded the following interview with us recently via Skype. While reading the interview, you might like to listen to Jimmy’s recent release of Missionary Man below the interview on this page, click play and then read on!

UE: Hi Jimmy, and thank you for taking part in Ultimate Eurythmics Revenge 25 celebrations. Your musical career spans many years. Can you tell us how you got into the music business and what artists have you worked with.

JZ: Hi Guys, yes I started playing the harmonica when I was about 15 years old just listening to old Rolling Stones records. Starting playing in bands around Sacramento when I was around sixteen, then when I was 18 a friend of mine who had a saxophone that he didn’t want to play anymore, so I asked if I could borrow it and started playing. So I pretty much learned saxophone by listening to records and you could pretty much say I was self taught. I would listen to Junior Walker and King Curtis and Stanley Turnteen, I liked the rock and soul type sax. So I played in bands in Northern California from the early to late seventies, playing in bands and run a business, touring through Canada.

UE: When did you move to LA?

JZ: I moved to LA around 79/80 and tried to meet people it was very hard, it was very different. I was used to playing 5 or 6 nights a week and suddenly it was nothing. Everyone in LA was trying to get a record deal. This was in small clubs and I was playing at the central on sunset trip I somehow got involved with a jam session they ran on Monday nights. I’d play harmonica and sax and later got an audition with Rod Stewart, which I got and I was with him for about 5 years.

Yes. I was I with Tom Petty, and did his album and the track “Don’t Come Around Here No More” which was produced by Dave Stewart from Eurythmics, that’s how I met him. Dave started using me in sessions in LA like for Fergal Sharkey and Stevie Nicks and we got along well. We also got to know each other during Tom Petty’s tour but after the tour I didn’t hear from him for about 8 months.

UE: So how did you get involved with the Revenge album recording?

JZ: Dave left a message on my answering service in LA. The message said ‘Hey Jimmy, it’s Dave Stewart from Eurythmics, I’m with Annie in my flat in Paris and we wondered if you could come to Paris and blow wind down bits of metal for us. My number is, oh wait I don’t have my number, I’ll call you back and hung up. Then I didn’t hear from him for two weeks and I was going crazy thinking he would never call back. Anyhow he did so me and Phil Chin the bass player who also played with Rod Stewart flew over together to Paris and they were late picking us up at the airport and we waited for hours. Eventually the driver came and asked if we wanted to go to the hotel or the studio, so we said ‘oh the studio’. We got there and Dave introduced us to Annie, they were kind of partying and drinking Heineken.

UE: So what was happening in the studio when you arrived?

JZ: They were doing this song, which didn’t sound like the Eurythmics synth pop I was expecting. It sounded like ACDC, that song turned out to be Missionary Man. They were working on it as soon as I walked in the studio. They asked Phil to put some bass on it then Annie says ‘ok Jimmy Z, your next, let’s see what you got’ so I said ‘ok’ and she says ‘it’s ok I’m just kidding, I know your tired’, but I said ‘no, no its ok, put it up’ thinking ‘shit I better be good’.

So we rolled the tape and I kept playing and played about 7 or 8 minutes, it was a long song but I kept playing and my mouth was getting dry, but I didn’t want to wimp out. Finally I finished and they were just looking at me through the glass and saying nothing and I was thinking ‘oh that didn’t go so well’. Then they pressed the button and said ‘come on in’ which isn’t always a good sign. So I go in and they said ‘that was amazing’ so I’m like ‘ok, cool, give me another go’ and their like ‘no, no that’s it!’, and that’s how my part in Missionary Man came about, fresh off the plane and in one take.

UE: Was the rest of the band there then at that time too?

JZ: Yeah John, Pat was there, Joniece wasn’t there then, they hired her after they heard her sing on Missionary Man.

UE: The videos from Revenge are all visual feasts, did they take long to film?

Yeah we did all those in one 24 hour period. We went out to the Bois de Boulogne in Paris and we had the Paris Hells Angels, it was nuts. It was around the clock, it was a lot of work. I was amazed at Annie’s stamina.

UE: How long after the recording of the album were you asked to go on tour?

JZ: They made the offer in Paris after recording and we got all the details sorted out then I found out that Missionary Man had been released as the first single in America which was great. Eurythmics was trying to get more into the AOR market and I think it did pretty well there.

UE: When you played Missionary Man live how much input did you have on the arrangements?

JZ: We had a free reign pretty much, we worked out some parts on songs like Would I Lie To You, which already had sax on them but others like Here Comes The Rain Again they pretty much said ‘play something on the intro’ they were really cool about letting me interpret and do what I wanted to do.

What was really cool for me was There Must Be An Angel. It was Stevie Wonder on the original obviously and when we had our first band rehearsal in Paris for the show, Dave was working in the studio and Annie was running the rehearsal. I remember when we got to that song she’s looking at me like ‘lets see what you can do with what Stevie Wonder did’ and she’s looking at me like ‘come on’. It’s weird because the little bridge before the solo changes key and I’ve got this one harmonica that will work for this song and it came to it and I started playing and I was blowing and I think I blew her mind. She shook her head and it was like ‘ahhh, Jimmy Z’.

UE: It sounds like you had a great relationship with Dave and Annie.

JZ: Yes, we had a really good relationship a kind of ribbing each other. People always ask about the solo at the Nelson Mandela gig and that pretty much brought the house down, it was really fun and Eurythmics were always really generous with their solos.

UE: Did you have any input on the clothes you wore on stage?

JZ: No that was Annie and Dave, it came from them. Our outfits were a bit like their leather jackets except there was no belt on mine. So they came up with the whole concept.

UE: Were the gigs choreographed?

JZ: No we made it up as we went along. When you’re in a band you find out things which work and figure it out as you go along. We didn’t have anyone telling us what to do, like saying ‘you lie on the floor in this bit’ or ‘Dave you smash your guitar at this point’. Some things just evolved, like bringing me to the front of the stage. It was one of the best bands I ever worked with. Chuchu was so funny and Pat was a really smart guy. I played with Chuchu later in another band called The Jaguars. We were always reminiscing about the old days.

UE: Did the guitar get smashed at every gig?

JZ: No, there was a run there but I think he got tired of running out of guitars. It’s hard to find a good one.

UE: There was a rumour that the Revenge Band were going to record an album, and the Revenge tour programmes suggested an album may be released. Is there any truth in that?

JZ: How did you hear that? I think there was some talk about that but Dave and Annie went a different direction for the next work, more with drum programmes so that sort of put things on the back burner for the Revenge Band. They wanted a different sound.

UE: What are your favourite memories of working with Eurythmics?

There’s a lot, we toured around the world. Australia was really fun; we were there for about 6 weeks. We did about 20 dates at a stadium in Sydney. Eurythmics were massive there. It was my birthday during this leg of the tour and when we got the itinerary at the airport I was looking at the dates and it comes to February 7th and it says ‘day off, everybody come to harbour 20 for Jimmy Z’s birthday party!’ So we had a three storey boat sailing round Sydney harbour. That was fun with all the band and crew, it was pretty cool. I wished we could have done more dates in America but we did mainly the rest of the world.

UE: Have you kept in contact with anyone from the Revenge Band?

JZ: I’ve talked to Joniece and Chuchu and I’ve seen Clem at gigs of mine in LA. I haven’t spoken to Pat but I think he’s in LA also.

UE: Have you seen Dave and Annie since then?

JZ: They came out with the record Seventeen Again from their album Peace, and they got in touch with my manager and they wanted to put a band together and tour. They had two shows lined up one in LA and one in New York but I don’t know what happened but nothing ever came of it.

UE: What are you up to at the moment?

JZ: I have my blog although I’m not very good at updating it, I’d rather do interviews it’s easier to tell stories rather than writing them. I also just did some stuff in Sweden, I went as an experiment last October to do this jazz/blues festival and it went really well. I might come over to London with some of the guys I used to play with for Rod Stewart. That would be October this year. Of course, I’ve also released my own recording of Missionary Man. I’ve recently played Dusty Road Blues Festival in Sweden. We performed our new version of Missionary Man which you can also get now on iTunes. (See next page for video)

UE: Jimmy, thanks for taking the time to chat with us.

Visit Jimmy Z’s website here. Jimmy Z’s Recording Of Missionary Man, streamed below, and you can download from ITunes here