I’m writing this a few hours after the show finished, I’m not the best of writers, but I feel compelled to recall the intensity of Annie’s performance the best way I can. I think it’s going to be quite long!

Annie Lennox returned to the stage last night at the sumptuous Orpheum Theatre in Los Angeles for her first full concert for many years.

The audience were made up of various contest winners, friends and family and charitable supporters ensuring this was one big room full of Annie Love. Guests included Annie’s husband Mitch, her daughter Tali and her manager Simon Fuller.

The Orpheum proudly announced Annie’s performance on the outside of the building with all of its Art Deco neon lights illuminating the street becoming the backdrop for so many photos as people reached the head of the queue. 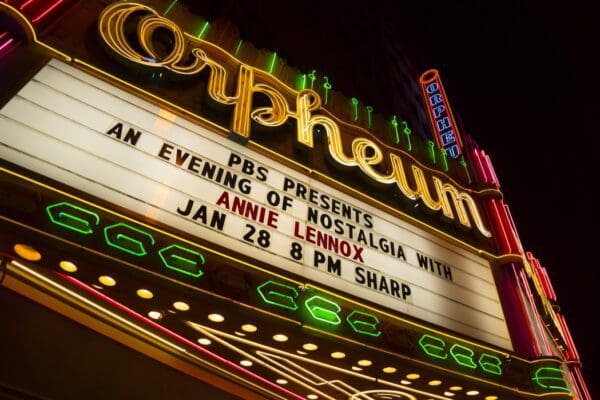 Annie was introduced to the stage by Don Was, the chairman of Blue Note Records who spoke about how challenging it is today to present the arts today in any form, and it is especially hard to present music properly. The whole performance was filmed as part of the PBS Great Performances series and they were thanked for the opportunity to present this show.

Don spoke about Annie’s musical career describing her as having an indelible impact on music from the 80’s to today and that she was one of the greatest singers of all time with her unique voice. He said that the show was something special as all of the songs from Nostalgia would be performed for the first time.

So the stage was set and the red and gold velvet curtains parted revealing Annie wearing her red suit and spotted scarf, along with her band and orchestra with her long term musical director Mike Stevens acting as conductor or guitar player throughout the night.

Annie was seated on her stool as the opening bars to Memphis in June washed over the audience to rapturous applause. She soon got up and owned the stage. There were 16 musicians throughout the night and the mix allowed Annie’s powerful voice to just ride over them, without being drowned. credit should be given to the sound engineers for getting that right.

It was clear very quickly that Annie was going to perform the whole album in order as she started singing Georgia, a popular song judging by the reactions around us from the audience.

Before we knew it, Annie had already cast her spell on us, but she was joined by 3 backing vocalists, one of whom was Annie’s older daughter Lola. Annie turned in the most outstanding performance of this song to date, enjoying ever second as she sang and air punched every beat of that song, stamping the ground, mesmerizing with her slow twirl, her hip wiggle adding to the build up. Mike Stevens guitar was flawless again just setting the right tone to allow Annie’s vocal to soar leading to a standing ovation before the last note was finished.

Summertime and I Covered The Waterfront were equally stunning, the later featuring an outstanding trumpet accompaniment, but it was the first half set closer Strange Fruit where the emotion of this powerful and disturbing classic absorbed the silent audience. Annie has struggled with a lot of negative press around this song, but tonight’s reaction from the audience, both black and white hopefully restores her faith that it was absolutely the right song to place on this collection. It was hard to tell, but I think Annie became incredibly emotional at the end of the song and covered her face with her hands before leaving the stage as the curtain came down on the first half.

After a short interval, Annie returned to the stage to perform the second half of the album, and of course took the opportunity for a wardrobe change, selecting an incredibly elegant and simple long black dress.

God Bless The Child took Annie’s vocals to an almost gospelesque level, soaring to the high notes with ease, each song being accompanied by black and white video backdrops projected onto a semi-industrial slatted screen, never overshadowing the main stage.

You Belong To Me took us on a dreamy journey from Egypt to the jungle while September In The Rain opened with the violinists and pianist easing us into Annie’s gentle and sensitive vocal arrangement. I Can Dream Can’t I introduced an accordion to the music building with Annie’s vocal as she soared to the high notes which continued into mellow The Nearness Of You

Those that know the album and perhaps the video knew that the closer Mood Indigo would be different and it certainly was. This is a song that just slowly builds and builds, The stage was full, every musician and singer were present on stage and from the back of the audience 3 Dixieland musicians with trombones and trumpets slowly made their way to the stage, in an elephant stomp New Orleans funeral march, wearing the Nostalgia, Feminist and Peace sashes from the video.

The sound was the brilliant crescendo it is on the album, as Annie sang the last few notes of the song, the glitter sparkle (Sue) fairy started to sprinkle the stage and the credits were projected on the rear wall. Annie walked off the stage and reappeared moments later with the peacock headdress as she paraded the stage, no need to say look at me, everyone was, and loved her ownership of them.

Rarely do you see an artist having such fun with their performance but it is a unique artist that can carry an audience on a musical journey ecompassing the worst parts of humanity and the deadly serious American historical lynching to songs about class, travel and more while injecting, style, passion, somberness and comedy. If that is what Nostalgia is, then Annie just redefined the word.

After a short pause as the set was changed, a piano was wheeled into centre stage, and Annie appeared in her third outfit for the night, a grey suit ensemble. She thanked the audience saying it was a room of love, she said she knew a lot of people had travelled a long way for the show and said she was touched greatly by this.

This was the first time Annie spoke with the audience and you could see there was a sense of relief that it was done and no retakes were needed.

Now it was her time for a bit of fun and she said she would sing a few more songs, but not too many, she said she was told to always leave the audience wanting more.

She performed 2 Eurythmics songs and 2 solo songs bringing slightly different arrangements to each of them.

Opening with Here Comes The Rain Again, the audience were immediately with her as she performed an outstanding vocal.

Next was No More I Love You’s, she left her piano to get the audience doing the doobe do do do aargh’ before returning to the piano, but literally as she sang the word lunatic a female member of the audience appeared on the stage near Annie which startled her, but she dealt with the situation so professionally telling the lady who wanted to sing with Annie that it was her night. She continued the song with huge encouragement from the crowd and had a big standing ovation.

The opening bars to Why were played and again a different arrangement just brought a few different tempos and styles to the song, I guess this is how Annie keeps her old familiars fresh. Another standing ovation led to the final song of the night Sweet Dreams Are Made of This, the audience started to sit down, Annie said what are you doing, get up and dance.

This was it the crowd pleaser, she sang it as if it was the first time, but far too soon, it was done she was out of her seat bowing gracefully, a few Annie twirls off the stage and she was gone and the curtain came down.

An amazing night made more enjoyable by being able to meet many of the US peeps I gave known for do long, but had never met. Some far too briefly, and for that I apologize, but thank you all for making this evening even more special. Also on behalf of a lot of very very grateful people, a huge thank you to The Pixies for the opportunity to be part of this special evening.

Set List:
Memphis in June
Georgia on My Mind
I Put a Spell on You
Summertime
I Cover the Waterfront
Strange Fruit

God Bless the Child
You Belong To Me
September in the Rain
I Can Dream, Can’t I?
The Nearness of You
Mood Indigo

Here Comes The Rain Again,
No More I Love You’s
Why
Sweet Dreams (Are Made Of This)