40 Years ago, Eurythmics released what would become their breakthrough album on 4th January 1983. Love Is A Stranger had already been released as a single but failed to ignite a new audience, but the album release and the subsequent title single release launched Eurythmics onto a whole new level.  All of a sudden they were the band in demand, airplay all over the world, front covers of magazines that had proved elusive before, and demand for live interviews.

Over the last 40 years there have been various releases and limited editions of the album that have appeared, and we thought we’d bring you a Top 10 album collectables, not necessarily of value, but of interest. We’ve chosen to miss out most standard releases around the world, and of course there’s a whole feature we could write just on bootleg pressings alone!

Do you think we’ve missed something that should be featured? We’re happy to run a follow up feature if you think so, just message us. 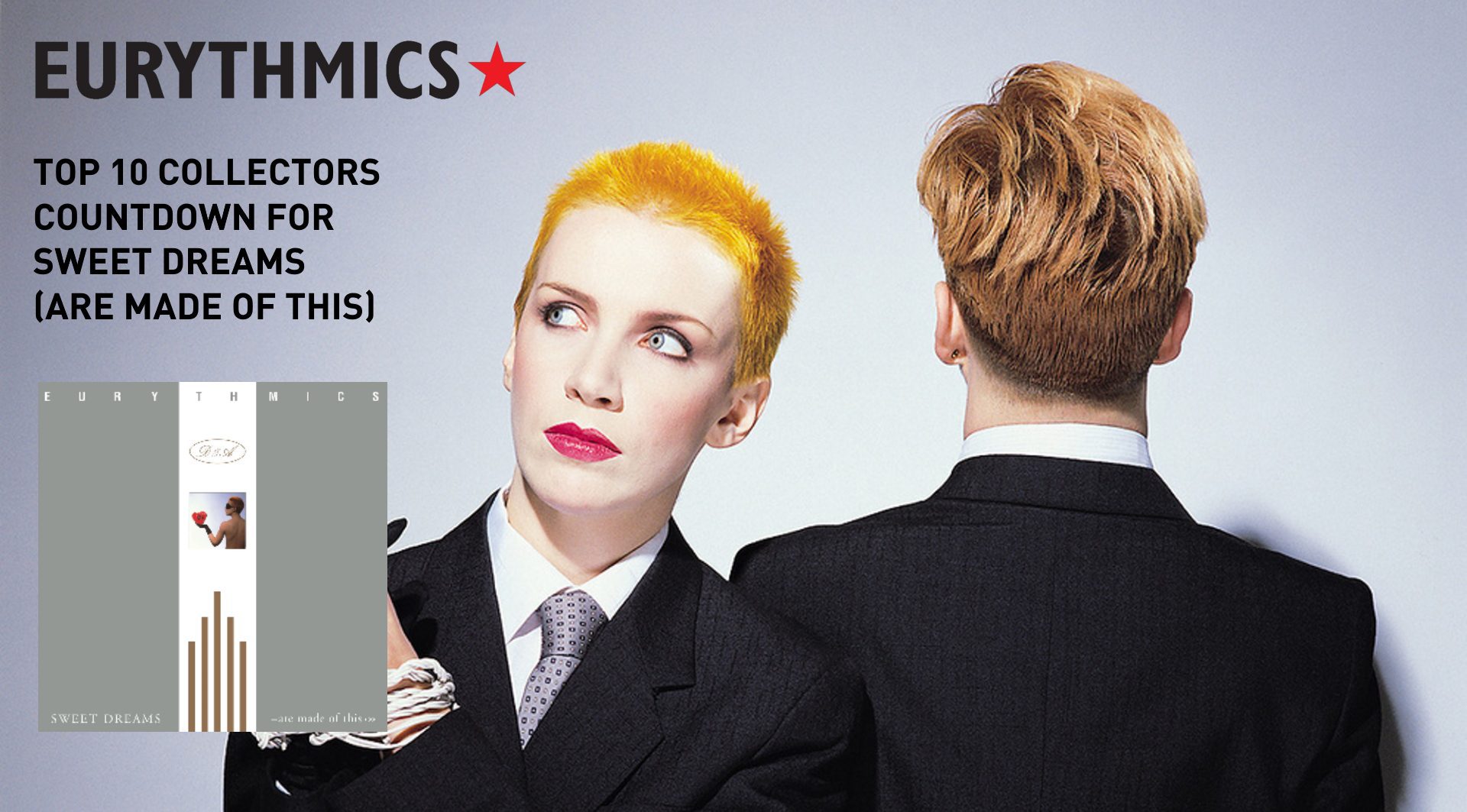 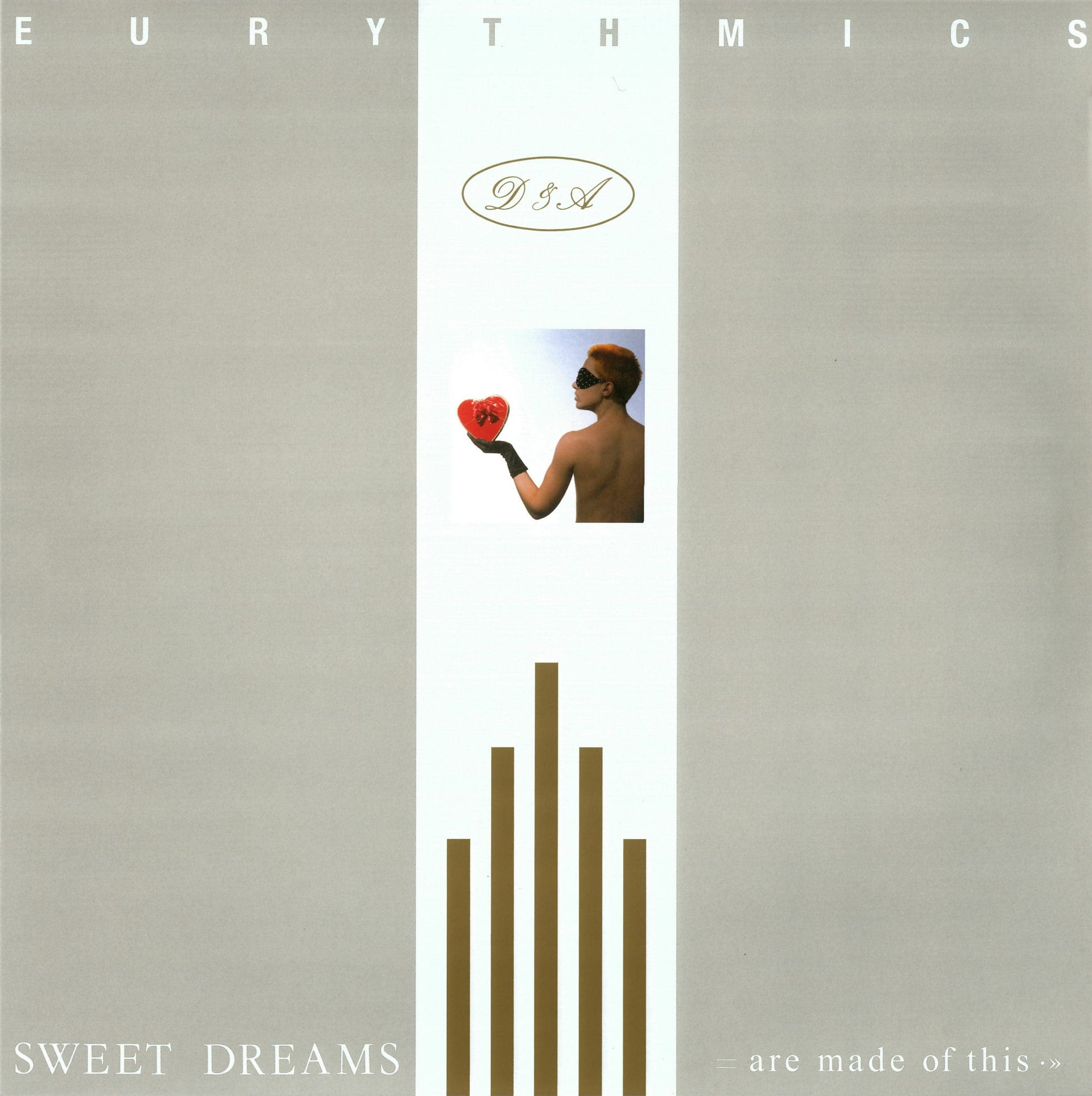 Let’s start our countdown with something that most of us will never own, and is probably priceless in the collectors world. We feature 2 different sets of master tapes in our discography, both from August 1982, Both have an added interest as some of the song titles listed are different. Jennifer was originally labelled with the song title “Underneath The Water” The album at this stage was also known as Eurythmics Album II. On the other master tape This City Never Sleeps also has a different title and is shown as “Just The Feeling”

The album in the UK was also issued as a picture disc, which can be still purchased for £20 – £30 in excellent condition but was the first album picture disc Eurythmics released. It’s a staple item in any collection and Laurence Steven’s simple design keeping the front image purely as a picture of Annie Lennox gives it an extra impact, especially when framed and hung on a wall.

Australian releases often are slightly different, but in this case, the release was significantly different giving us the only gatefold sleeve release of the album anywhere in the world. Essentially the inner sleeve bag that most other releases had became the inner part of the gatefold sleeve. A mint condition copy should cost no more than £25 but if you are happy with a lower grading £10 should get you a copy.

Let’s go to Europe for this next release. In 2005 Belgian newspaper De Morgan op Zaterdag ran a promotion where you could get a special edition of various albums with a purchase of the newspaper. This release was based on the 2005 remaster CD series and contains the 16 tracks but comes in a dedicated slip sleeve but came in a jewel case not a digipack like the remaster series in general.

A bit of a novelty release from Japan, but was one of only 60 albums released by Sony using a new CD format called Blu Spec. Meant to give a superior sound, what it really translated to was a better way of reading errors and error correction from the surface of a CD, especially after it was scratched through being not cared for properly. A Blu-spec CD can be played in any standard CD player. Expect to pay around £35 for this edition.

Let’s take a trip to South America this time, there are some nice Brazilian promo’s but we’ve selected this promo from Argentina that has quite a different back sleeve to the standard release as well as all the titles printed in Spanish on the main label. You’ll be looking at paying over £70 for the promo version and around £50 for the standard release.

Here’s a very rare promotional cassette from 1983 for the album, we believe it comes from the USA, and has sold for upwards of £100 in the last couple of years. Containing the full album, it is rare as it contains the full album and is not just a stickered version of a main pressing.

Apart from LP’s and cassettes in 1983, the other format that was available was the 8 Track, declining in popularity because of their size and people preferring to buy the more compact cassette tape. Sweet Dreams was released as an 8-Track in the USA. Usually this would set you back around £35 – £50 depending on condition, but some lucky buyer got this for under £5 on Discogs last year.

Japanese release were always sought after, they used a higher quality vinyl, their packaging was always more luxurious, and there was the additional items such as an obi and often a Japansese translated lyric book. Japanese CD’s when they were first pressed were also considered to be of a higher quality. This release deserves to be high up the collectable chart as it is a specially pressed promotional version on a white label and you’d need to part with upwards of £60 to get a mint copy. A non promo edition would be around £40.

In 2022, Eurythmics allowed UNICEF to include the Sweet Dreams (Are Made Of This) album as part of their fund raising campaign in their Blue Vinyl campaign. 20 titles were selected and pressed in a highly limited edition of just 48 copies in a UNICEF brand blue vinyl.

They were available to win as part of a ballot where UK buyers could buy a ticket for £5 in the hope of being one of the ;lucky winners. The reason that only 48 were pressed was to reflect UNICEF’s ability to react to any situation where children are in risk or danger within 48 hours.

We’ve put this at No. 1 as it is highly desirable because of it’s scarcity but we know that 1 copy has already sold for over £750 making it the most collectable and valuable version of the album.

Do you think we’ve missed something that should be featured? We’re happy to run a follow up feature if you think so, just message us.

28/11/2022
The Earthshot Prize, the global environmental prize founded by Prince William in 2020, today announced its performer and presenter line up for the second annual awards ceremony to be taped in ...
Read More