Annie Lennox: The Many Faces Of A Style Icon

From Today’s Metro in London:

For someone who was once one of the most famous pop artists on the planet, Annie Lennox is looking at photographs of a forthcoming V&A exhibition about herself with surprising detachment.

‘There are the brown ears I wore on the video for A Whiter Shade Of Pale,’ she says deadpan, flicking through the catalogue on her BlackBerry for  The House Of Annie Lennox, an installation that serves as loose adjunct to the V&A’s autumn blockbuster, Postmodernism.

‘There’s the Union Jack suit Dave and I wore to The Brits,’ says Lennox. ‘Look, there’s the chocolate box I held on the cover of Sweet Dreams (Are Made Of This).’ She looks, for a second, almost wistful.

Few artists understood the  power of the image better than Lennox in her heyday, even in  a decade crammed with pop gamechangers who, like her, immediately seized the revolutionary power of the three-minute pop video.

With her sharp tailoring, androgynous appearance and gender-bending performances in videos such as Who’s That Girl  (a Top Three hit for the Eurythmics  at a time when Top Of The Pops  was the TV highlight of the week), Lennox was so effective at confounding preconceptions that for years, people thought she was gay.

Even though she is today much more active as an HIV campaigner and general conscience of the world, Lennox’s perfect grasp of pop’s ephemerality makes her an intriguing sideline subject for an exhibition about our postwar love affair with the theatrics of style.

‘These costumes are like skins of  a snake you shed off,’ she says, looking at a black and white pair of brogues. ‘You then go on and have another self. Another aspect of reality.’ 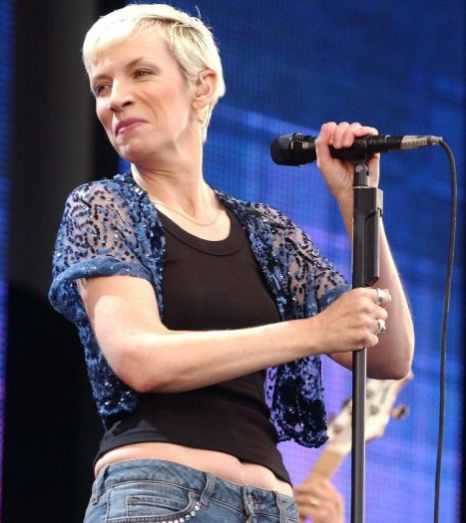 Nonetheless, The House Of Annie Lennox is a rather strange beast,  a bit like an arty, solo version of  Big Brother. A specially constructed house-within-a-house, it will showcase costumes, lyrics and other bits and bobs from Lennox’s globally successful career with Dave Stewart and as an activist and solo artist, but will also offer glimpses of Lennox herself inside the smaller house, working on her laptop or updating her blog.

It is, says Lennox with unselfconscious earnestness ‘about the source of creativity’. ‘I see the house as a metaphor for the self,’  she says. ‘We all have the material, physical substance of the body while inside is the soft matter of our brains and our consciousness.’

These are slightly bonkers statements from someone whose avant-garde cool and high-concept pop once made her a cultural icon. Now 56, Lennox is a bit prone to this sort of waffle, the subversive identity politics of old often now manifesting themselves in vague statements about the self and the life journey.

Yet if Lennox, in her black cords  and red cardy is, sartorially at least, today a long way from the angry young rebel of 30 years ago, she remains passionate (and nostalgic) about the power of pop. ‘When  I was a kid, people like John  Lennon, Bob Marley and Nina Simone had these social, underlying messages,’ she says. ‘They were  the clarion call. They kept the focus.’

Lennox grew up in Aberdeen. ‘A city so grey, I’d spend all my time in the art gallery because it was the only beautiful place to be,’ she says.  ‘I was obsessed with bright, shiny things. I’d stand outside houses at Christmas and just gaze in at the decorations.’

Then came the 1960s’ explosion of psychedelia, miniskirts ‘and magazines’ but it was punk  that, for her, changed everything.  ‘It did away with so many things,’ she says. ‘Kids were going about wearing plastic bags with their hair stuck up or down in whatever colour. It was a way of saying: “I am meaningless, so I will become someone through  what I am wearing.”’

Today she is, perhaps predictably, pretty scathing on a pop culture that feels much more about celebrity than creativity, lambasting ‘Z-listers who sell their cars, their boyfriends and their divorces in the magazines’.

A question about the impact of the internet on  the music industry produces a long answer about the recent riots in Britain. She agrees she is much more politically engaged than she ever was as a pop star.

‘The only song we had like that was Sisters,’ says Lennox. ‘I was always expressing a personal angst but it was never any broader than that.’ But she will always be a rebel. ‘Becoming a person who cut their hair and wore outfits that people queried was always me making a statement – even growing up as an only child in the 1950s,’ she says. ‘I will not follow the herd.’